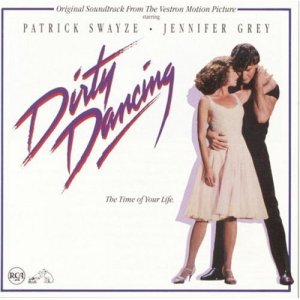 I think I’ve seen Dirty Dancing. I really can’t remember. It would have been years ago and I can’t even be sure if it was in one or two sittings. Either way, I’m not a big fan. For someone who spent much of his childhood going to dance school I’ve never really enjoyed ‘Dance films’, the dance scenes always feel a bit forced. I’m definitely in the minority with Dirty Dancing though, a film so successful that its soundtrack is the only movie soundtrack in the top 40 biggest albums of all time. The music is possibly the most important part of Dirty Dancing, except maybe the dancing, but that’s obvious isn’t it? Songs like Hungry Eyes and She’s Like The Wind are massively popular both in and out of context, but the album isn’t just 80s pop as I imagined it would be. Listening from start you finish you notice a back and forth between iconic 60s songs and 80s pop tunes. It’s an interesting dynamic which when heard separate to the movie makes little sense. Be My Baby and Hey Baby! contrast massively with a song like Yes, which caught me off guard as a massive 80s dance jam. I haven’t mentioned the big one yet though, the song that is probably the main reason Dirty Dancing finds itself so high on this list. A lot of people will mention the finale scene of Dirty Dancing as their all time favourite movie moment and most of that is down to (I’ve Had) The Time Of My Life. It is a great song, building up to that massive instrumental saxophone section before going quiet again before that final chorus explodes again. A classic pop song and one that has kept Dirty Dancing popular for so many years. It may not work very well as an album, but Dirty Dancing manages to be the only film soundtrack to feature in the UK’s all time sales list.

Will I listen again?: No. It’s not really an album as such. I should probably watch the film though.

Best Track: I should really pick (I’ve Had) The Time Of My Life here, it’s by far the best song on the album, but I’ve had Yes in my head since the first time I heard it and can’t choose anything else.