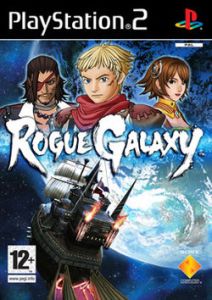 Rogue Galaxy should have been one of the PS2’s greatest RPGs. It has everything going for it; stellar stylized visuals, a killer action driven combat system, Level 5’s distinctive charm and a universe of planets to explore. It’s thanks to some glaring pacing issues and a distinctive lack of character development that it must have fallen flat for most players, as well as the fact it was originally released mere months after the PS2 RPG’s swansong Final Fantasy XII.

The similarities to that Square-Enix classic are striking and obvious throughout Rogue Galaxy. Space pirates travelling in their airship to put an end to an evil threat, the setting makes comparisons very easy very quickly. The fact that both begin with Star Wars-esque sandy landscapes makes Vaan and Jaster equivalent main heroes. In fact the opening sections of Rogue Galaxy are the strongest moments of a game, comparatively fast paced and action heavy compared to the plodding FFXII. Meeting each of your future companions planet by planet learning their distinctive skills and some of their back story keeps things moving forward for the first half of the game. From meeting the indigenous tribe of Juraika, to exploring the Mines of Myna each new area feels unique and fresh.

Things come to a crushing halt very quickly though, at about the halfway stage when you realise that the initial 4 planets are the only planets you’ll be visiting for most of Rogue Galaxy. It’s not just the backtracking, it’s the fact that each new area that you do explore is increasingly more drawn out and repetitive. In places it feels like the procedurally generated environments of previous Level 5 game Dark Chronicle, despite everything here being set. It’s most noticeable in Chapter 8 that not only features 2 long winded fetch quests, but also a third that takes place in the most boring and repetitive setting of the game, the Zerard Towers. A maze that manages to feel both linear and impossible to navigate it’s around 3 hours of fighting the same enemies over and over again next to the exact same scenery over and over again. It’s a real slog and if the game wasn’t ridiculously easy thanks to some interestingly implemented item usage, it would end most players time with Rogue Galaxy right there.

My party setup for the final boss of Rogue Galaxy

It helps that the battle system is fun. Very simple, but enjoyable. Taking elements of turn based RPGs and replacing wait times with an action gauge that decreases makes battles quick and effortless, while the ability to open the main menu during battle in a party based game like this is unique and makes surviving much easier than it was in Dark Chronicle. In fact before the final dungeon I only had one game over in my entire 40 hour play through. For me in an RPG that’s unheard of, especially a Level-5 one given how tough I’ve found their other games.

For my play through I ended up using Jaster, Deego and Lilika for nearly the whole of the game, something that were it not for your reserve characters also recieving XP boosts after battle would have made the final section ridiculously tough. I found it weird how the game assigns you specific characters early on and then seemingly forgets to from about 10 hours in. I get that finding your own perfect team makes sense near the end, but it’s possible here about a quarter of the way through. Speaking of the characters though, the most noticeable issue many have with Rogue Galaxy is the lack of any character development from the squad of 8 party members. Other than your initial encounters with them, and a closing cutscene in the ridiculously long final dungeon, there’s absolutely no moments where the characters interact in a context other than ‘Now we need to go here and do that’. The fact that Jaster and Kisala have a special team ability that ‘is powered by the love they share’ and yet they basically have no relationship in the main game save for being the two youngest most human looking characters in your party is very strange. It’s no Tidus and Yuna guys…

Rogue Galaxy is a good game, it’s an RPG I’ve been putting off for so many years and for so many reasons I loved my time with it. On reflection though, its the sort of RPG that had I not had a spare 2 weeks to play through it all, I probably wouldn’t have come back day after day and spent every other hour of the day thinking about what I was going to do next. That’s the sign of a truly great RPG for me, when you spend your time away from the game thinking about playing it. It’s certainly not up there with Final Fantasy X, Persona 4 and Kingdom Hearts on the PS2 RPG scale, but it’s a journey I definitely don’t regret going on.

Best Moment: The opening hour is one of the most exciting openings of an RPG. It was easy to get lost in at first.

Worst Moment: The two Zerard Towers seemed to go on for years. The same repetitive enemies over and over, but it was the final dungeon that really frustrated me more.

As always, I’m taking a vote for the next game to add to my Pile of Shame series. so please let me know which game I need to play.

What game should replace Rogue Galaxy in my #PileofShame series?