I’ve always loved Final Fantasy V. Growing up it was the Pre-Playstation entry that resonated the most with me. Maybe it was the intricate job system? Maybe it was the seemingly simple story next to the rich narrative of FFVI? Either way, I seemed to feel a connection to the game.

With this in mind, you’d think I would have made it to the end at some point in the 13 years I’ve owned the original Playstation remake of FFV. In fact I don’t think I ever even made it a third of the way through on a single save, difficulty spikes and massively under-levelled characters forcing me to stop playing for years at a time. FFV definitely isn’t an easy game to drop in and out of, it requires your full attention to even know where you should be heading at any given point, with three different world maps each featuring land, air and sea traversal. By managing to push on to the second world and get further than I ever had before it spurred me on to finally complete the game, as well as attempt this blog series.

It’s a ruthless game that requires a detailed knowledge of the ins and outs of the Job system. Like the fact that there’s no point within the game you are told that having no job assigned gives you all of the auto-abilities of your mastered professions. Knowing which jobs are even worth bothering with is a challenge too, as it isn’t until very near the end of the game that you receive anywhere near enough AP to level your Jobs up efficiently. It’s quite like FFVII in this sense, where it’s a long slog of switching between Materia before some power levelling on Disc 3. If I hadn’t had the internet to help me, I’m not sure I would have even known where to start with strategies for the late game. 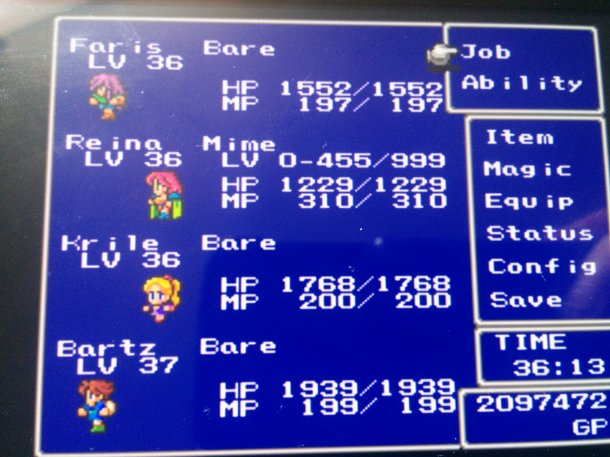 My team for the final dungeon of the game.

The one that worked the best for me? The Ninja/Sorcerer/Hunter trio of abilities was essential for the final portion of the game. By Mastering all three jobs you get access to 8 magic infused attacks at once, by far the most damage I was able to inflict in one turn for my play through. Bartz, Faris and Krile (or Galuf) had all three of these mastered, while Reina (These are the EU names from the PS1 version) was focused on magic from the off. This strategy payed off big time right up until the final boss, even though technically I did avoid both of FFV‘s superbosses along the way.

The final fight with X Death is definitely one of the toughest end boss battles in the main series games. I’d probably put it up there with FFVIII‘s Ultimecia fight for the sheer number of retries it took me. In the end I had to change my strategy, where double-casting Bahamut and performing Mime over and over and over and over again eventually payed off. It felt a bit cheap last night when I finally managed to pull it off, but sometimes the least skillfull tactic is the one that works in Final Fantasy.

In the end did Final Fantasy V live up to the fond memories that I’ve had of it? I guess it did. The main problem is that despite some interesting character development early on, there’s a point about hafway through where you don’t really know what the end goal is. Yes, you need to stop X Death, but his constant ‘DESTROY EVERYTHING WITH THE VOID’ comes out of nowhere after little exposition of his true intentions early on. He’s kind of like Seymour from FFX, but without the personality to back it up as a villain. Even next to IV, the story is a bit confused at times, despite Faris, Galuf and Krile being some of the best early entry main characters of the series.

The technical systems in FFV are what always made this game for me though and finally getting properly invested in my set of heroes felt great. Job systems have been the reason I’ve enjoyed so many Final Fantasy games and V is no exception. Perhaps I had overestimated the game as a whole, but as it stands this is still my favourite of the SNES FF games (Given that it’s the only one I’ve managed to complete that’s probably not saying much).

The Music in FFV is consistently excellent, especially the overworld themes. Unknown Lands is probably my favourite of these. It has a sense of real scale. It feels dangerous, but exciting at the same time, like there’s a rich world out there to discover. An overworld theme can make or break you’re enjoyment of an RPG and this is a good’un. 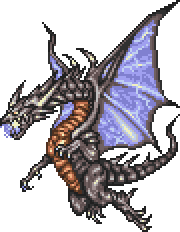 The Bahamut fight in Final Fantasy V should have been one of the most difficult in the game, but somehow everything fell exactly into place for me. I was sat on lunch break at work and managed to defeat this boss, it was an insane moment where my characters kind of won all by themselves.

It’s now time to move onto the next entry in the series. I’ve yet to decide whether this will be the original Final Fantasy or Final Fantasy II, I’m going to save VI for last I think. I’ll hopefully have some more to talk about in the next week or so once I get started with one of the other games.