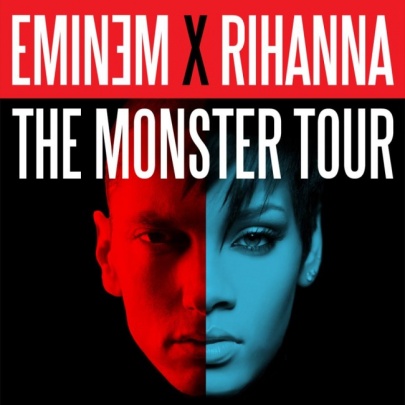 As Jay Z and Beyonce kick off their long anticipated On The Run tour two of the few artists that eclipse even that duo are preparing for their own joint tour. Eminem and Rihanna are arguably the biggest male and female artists on the planet and this brief but exciting tour could be a high point for both their careers. Despite the fact that they’ve only had a few hits together, I’ve put together a dream setlist of a fully co-headlining tour. They may chose to keep their sets completely separate when it comes to the real thing, but I wanted to create a setlist that combined their work into over 2 hours of killer tracks. (Be sure to check out the Spotify playlist below)

It may be strange to have the gig begin with Eminem by himself, but I get the feeling the major duets for the pair will be kept until the very end. As such, Survival makes a striking opener, while Rap God makes sure every person in attendance knows the reason why so many name Eminem ‘Best Rapper Alive’. Sing For The Moment and Not Afraid are huge stadium filling hits too. Ending with Bezerk means this is a massive burst of hits to open The Monster tour, as Shady exits the stage in darkness.

Umbrella has been way surpassed in the history books by some of Rihanna’s more recent hits, but as an opener to her portion of the set I can’t imagine anything better. Disturbia works perfectly side by side, things then moving into a new take on the opening of Rihanna’s 2013 Diamonds World Tour. Keeping things Hip Hop centric early on will get the Eminem fans on board if any of them were doubting to enjoy Rih’s set. Ending with Numb, the pair can perform this track from Rihanna’s last album Unapologetic together for the first time.

Some more big hits from Shady here. The first of which is the Drake track Forever, which features one of my all time favourite Eminem verses. I think Rihanna could pull off a brilliant version of this song from her on again off again man. Em gets serious for a moment here too, which will be a nice contrast to Rihanna’s playful hits that appear either side. Like Toy Soldiers is another track that could do with some assistance from Rih, even if that may be pushing it. Expect Fun. lead singer Nate Ruess to appear once or twice to perform their recent single Headlights at some gigs too.

Given the split between Rihanna’s more urban hits and her out and out pop numbers I’d expect one segment of the gig to feature all of her massive hits in one huge medley. Rude Boy and What’s My Name have been side by side since the Loud Tour, while the 5 song onslaught of hits that follows was incredible on the Diamonds Tour. Rihanna has had so many hits at this point, fitting them all in this joint tour might be difficult.

As we start to reach the climax of the show we have a few more songs that Rihanna could join in with. I Need A Doctor is an obvious choice, Skylar Grey’s vocal on that track would be a nice fit for her, while the Bruno Mars track Lighters could prove a bit more troublesome. The other songs included here mark the last few hits for the pair before the massive finish, Take A Bow and The Way I Am sure to be crowd favourites.

Eminem has his own medley here, three of his most memorable hits and ones to really get the crown going before he delivers arguably his best track Lose Yourself. The 8 Mile soundtrack hit is my personal favourite Eminem song and here it would be a fine end to his solo performances. Rihanna is sure to end hers with the singles from her last album, Slowing things down for Diamonds and Stay before the ballad that brought the pair together in the first place.

Most of this setlist has been compromised of my dream tracks, the setlist I’d want to see from a joint Eminem/Rihanna tour, but if there’s one thing I’m certain on it’s the songs that will close the show. I expect both versions of Love The Way You Lie to be performed, with Rihanna starting with the version from her album before Shady returns to the stage for his. Either way this will be the moment of the show, one of the biggest hits of the last decade it’s an incredible rap record. Going straight into Stan I think Rihanna would act as an instigator for the mass singalong of the Dido assisted hit. Ending with the song the tour takes its name from, The Monster will be an explosive ending to a monster of a show. I may be asking a bit much of such a small set of headline shows, but this is my dream setlist for the gigs from two of the biggest artists on the planet.