808s / Everything Changes But The Music 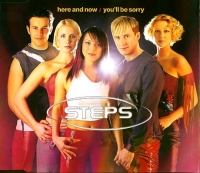 It may not be the most important song on the list, but Steps were probably the most important group in my musical life so far. From the years of 1997-2001 when I was between the ages of 6 and 10, Steps were my life. Unlike Take That, who’s audience was teenage girls at the time when I was 5, Steps were aimed squarely at me and my friends. From Step One being the first CD I ever bought myself through to their split on Boxing Day 2001, I lived and breathed for Claire, H, Lee, Lisa and Faye.

Obviously back then the music meant very little to me, I was too young to fully appreciate just how perfect the chorus of One For Sorrow is for instance, but what did mean a lot to me were the Steps themselves. Looking back on what must have seemed like an extremely lucrative marketing ploy from the record company, where each song would be accompanied by an equally vital dance routine, with said routines explained in the CD single notes, it’s easy to overlook the importance it had for me. I would spend all my time after school learning the routines, my brother, who at the time secretly wanted to join in but was too self conscious, helping me go through the simple steps found in the notes. I wanted more though, and would continually watch the videos and tour videos to learn every last detail of the verses and the moves too complicated for the ‘average’ Steps fan.

This is the main point here. I spent these years as more than the ‘average’ Steps fan, I was the local expert on just about anything to do with the band. Family parties would comprise of me performing the routines, teaching them to the people willing to cope with my need for perfection when performing the After The Love Has Gone dance. To most, the Tragedy dance was as far as it would go, the fact that this is one of my least favourite Steps songs and dances is evidence of my need for something more than everyone else. Most of my friends at the time were Steps fans, so performing them in my back garden, or at school in the playground was my day to day lifestyle, and my position at the top of the chain was part of the reason I adored the group so much.

I had ownership over Steps, no matter who else remembers the time as fondly as I do. It was my thing, and honestly I have Steps to thank for much of who I am today. To those who didn’t know me back then, this may seem obtuse. but I honestly don’t think that I would have ever asked my mum if I could go to Dance Classes without these years where Dance was ‘my thing’, coincidentally I joined Wallasey School of Ballet the year after Steps split. Now I can’t imagine not going to my weekly Tap Class, and even though I’ve changed from the Deeper Shade of Blue dance to Time Steps, the impact is still there. In terms of dance routines, has anything really changed for me? I can watch the new Beyonce or Britney video a few times and know the entire routine, and I’m not just talking about Single Ladies, I mean songs like Sweet Dreams and Run The World. While my decision to ‘perform’ these has now been reduced to never in public again, the fact I can pick up routines so easily from a video is attributed to Steps alone. 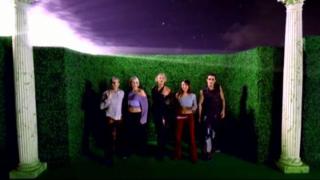 I haven’t even mentioned the song I’ve chosen yet, a choice both because it is undoubtedly my favourite Steps song-one that wouldn’t seem out of place in the current charts-but because of that same sense of ownership I have over it. Here and Now wasn’t one of the band’s biggest hits, and the dance routine isn’t my favourite of theirs, Summer Of Love definitely holds that title, but it’s the song that sends me back to that feeling Steps gave me back in the day. I was never one of the crowd, and I probably still come across as the sort that doesn’t enjoy ‘easy’ music that everyone likes (see Adele, Bruno Mars, Jessie J, Generic Dance), and Here and Now was mine and mine alone.

Much like Take That, the cycle has come full circle with the group reforming and scoring a number 1 Greatest Hits and an Arena tour which I’ll be seeing next year. Though I can’t imagine Steps being bigger than ever on a Take That scale, revisiting the most important music group in my life is a brilliant experience. 10 years on Here and Now and their other songs send me right back to the 10 year old I was.