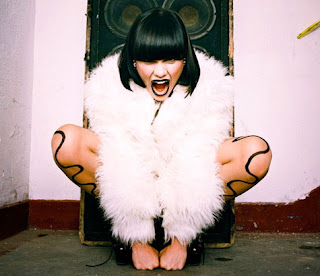 Around the start of 2011, I had started to hear great things about Jessie J. Her debut song, the now infamous Rihanna inspired Do It Like a Dude had become a hit and made its way into my iPod’s Big Tunes playlist. Follow up Price Tag was much more straightforward chart friendly pop, but with a catchy chorus and welcome guest verse from B.O.B, it reached the top spot last month.

I had been excited to hear the album, following her wins of both the Critics Choice Brit Award, and being number 1 on the BBC’s Sound of 2011 list. Once the release arrived though, I was sorely disappointed to hear that Jessie J was victim to a trait that extremely frustrates me.

Artists whose best quality is being an ‘amazing’ singer fall into two distinct categories. Those that rely completely on this aspect of their persona (see Adele) and those that throw everything else they can think of into the mix just so they can be regarded as cool next to ‘crazy’ artists in a post GaGa world. Jessie J is the latter, and while she has a lot of great songs on her album, she ruins near enough every one of them by using her ‘amazing’ voice. Price Tag is the best track on the album because she actually sings the tune, and doesn’t improvise around it with some ridiculous vocal acrobatics. The fact that track 4 is a live performance that showcases a powerful, but overly warbling vocal is proof that Jessie J doesn’t enjoy being tied down to catchy Pop hooks.

This kitchen sink approach the the whole affair is seen in her image too. Watching her interview/performance on Graham Norton last week, she looked plain ridiculous in her full length skin toned body suit, the appeal of ‘looking quirky’ only working for people who are quirky to begin with. When she’s quoted as saying ‘Hair is my thing’ in reference to her ‘crazy’ half cut style it makes me laugh when in another interview she talks about how difficult it is for artists to compete in a post GaGa industry.

It’s here that I have to praise the artist currently besting JJ in the charts, Adele, whom I have my fair share of problems with too. Her album may have 5 good tracks and a load of filler, but she’s completely honest in everything she does, it never seems forced. She has a powerful, emotional voice, but never shows off with it, instead proving that the best singers don’t need to cover up dodgy pitching with sheep-like warbling. She was a deserving winner of her awards back when she first came onto the scene, while Jessie J beat out what has so far been the artist with my favourite album of 2011.

James Blake came second to JJ in both awards mentioned, and it’s obvious why he was in the running. Originally a dubstep producer, he used this expertise and blended it with a singer songwriter vocal to create the most experimental, and interesting album I have heard in a very long time. There’s nothing quite like him out there right now, and while it’s obvious why Jessie J could benefit much more commercially from the publicity, it’s still disappointing to see James Blake being shunned into obscurity so soon.

I think the best way to end this somewhat scathing take on Jessie J by mentioning her most infamous writing credit. Miley Cyrus’s Party In The USA is a much better version of Price Tag, in part due to the appropriate vocal delivery of the Disney star on it; the Dr Luke production being near identical. Jessie J is undoubtedly talented, but based on her debut album, I feel like her genre of choice was misguided.