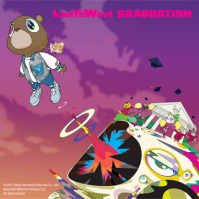 The 3rd and final entry in Mr West’s education inspired series, Graduation is not only the most commercial CD of the bunch, but also the best. With beats as tight as ever, Kanye crafts hit after hit, both those destined for the club, and the street. The Daft Punk sample in Stronger succeeds in making an already Iconic hook more classic than ever. Yeezy’s greatest single arrives 9 tracks into the disc too, the unmatched production on Flashing Lights defining everything great about the artist’s most immediate album. Repeated listens only prove why Graduation is a career changing record.