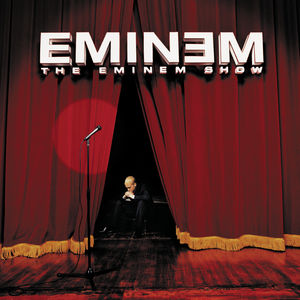 It has surprised me that in the 4 years of doing these blog series I have only covered one Eminem album, my reaction there wasn’t too positive and it’s important to note first off that most of my problems with The Marshall Mathers LP are still present here. The Eminem Show still contains the same number of songs that talk about domestic violence towards the rapper’s ex wife all of which are just as uncomfortable to hear. The songs Drips is the most obvious example of this, where Obie Trice manages to describe sex in even more graphic detail than Lil Wayne does, before Marshall joins in to let you know exactly what messed up things he’s willing to do to her. Unlike The Marshall Mathers LP which felt like an outpouring of anger and emotion – for better or worse – The Eminem Show is much more tightly focused record. This anger is honed perfectly on the likes of Sing For The Moment, where he takes down the music industry and critics of both his music and rap music in general. The interpolation of Aerosmith’s Dream On works incredibly well here too, the influence of rock music heard on tracks like this, Soldier and Cleanin’ Out My Closet marks a distinct shift in his sound. The latter of these is the most personal track on the record and tows that line between heartbreaking and disgusting just like his most iconic songs. In some ways The Eminem Show manages to be even more personal than his previous namesake album, but there’s also a handful of songs including closing track My Dad’s Gone Crazy and standout hit single Without Me that move away from the serious tone of much of the rest of the record. Here Eminem is allowed to truly excel with his flow, it’s interesting to me that often it’s the most hard hitting hip hop leaning records that get the most attention, but the intricate lyricism is probably strongest on the skit inspired ‘comedy’ tracks. The production across The Eminem Show is consistent to the point where it allows the order of the tracks to have the same tight flow that Shady has in his verses. For me personally the highs may not have been quite as high, but The Eminem Show is a much more impressive overall listening experience than The Marshall Mathers LP. It’s full of the best and worst of Eminem as a performer and as a person.

Will I listen again?: Probably not.

Best Track: Sing For The Moment was the track that I wanted to go back to the most here.