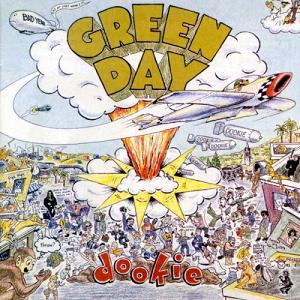 Green Day are an impatient bunch, at just over 38 minutes, Dookie is one of the shortest albums in this series. There’s very little time to ease into each of these 15 tracks, none of which last longer than 4 minutes so it feels like one long punk fuelled angsty statement; the album is all the better for it. There’s not much experimenting with the sound here, so you know whether you’re going to enjoy the album once the opening run of 4 tracks culminated with stand out Longview. Songs rarely dare to go anywhere new, Welcome To Paradise drifting to a subdued middle 8 before the guitars crash back in is about as surprising as it gets here. They get to the point quickly, even when the point is apathy towards just about everything in their lives. Green Day have this amazing talent of making the most mundane topics sound exciting with Billy Joe Armstrong’s speak-sung performance. Dookie as an album skilfully skirts that line between hard rock and radio friendly Pop, where even though everything here is full of a catchy hooks it still sounds like it was recorded in someone’s garage. It’s as major label as rock can get, but never sounds like it. Stand out single Basket Case is the best example of this, a song that still is full of youthful energy when you hear it on radio 25 years later. The stabs of guitar every time the ‘Sometimes I give myself the creeps’ line appears is one of Dookie‘s most memorable moments. The way When I Come Around builds and builds before dropping out again feels like the blueprint for the Punk Pop songs that would dominate the turn of the century just a few years later. There’s definite highlights here and while everything does kind of sound the same it’s an album where no song sticks around long enough anyway. Three songs near the end are so short that by the time you find the chorus it’s onto the next. It’s a mentality that Green Day would soon expand into the ‘concept’ records they would make later in their careers. I’m genuinely surprised that Dookie has outsold the bigger UK hit American Idiot, which had such a huge impact in the early 00s and for me is a much more enjoyable record than this. Dookie is an album that shows up, makes some noise and leaves. I quite like that noise, and quite a few other people did too.

Will I listen again?: Probably yes.

Best Track: Basket Case is the definite stand out here, the strongest hook of the album and it still sounds fresh today.