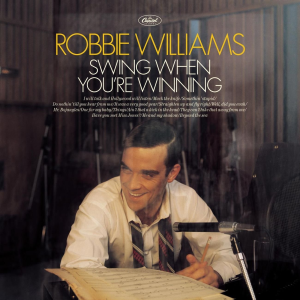 It’s strange to think of a time when the idea of Robbie Williams finding success as a Rat Pack crooner was alien to the British Public. Many have tried it, from Peter Andre to Westlife to Lady Gaga, but Robbie hit the nail on the head in a way that seemingly no one else has managed since. He’s just so god damn charming, the ‘boy done good’ swagger he has giving him more in common with the likes of Frank Sinatra and Dean Martin than just an occasional problem with liquor. It’s easy to forget just how great a vocalist Robbie is, on Mr Bojangles his voice soars over the big band, on Do Nothing Till You Hear From Me he’s equal parts cheeky and sweet. He manages to stay on the right side of serious throughout, it seems like Robbie is in on the joke that he should be the furthest thing from the American Hollywood glamour he’s portraying; Jonathon Wilkes’ ‘What you talking like that for, you’re from Stoke’ on duet Me And My Shadow sums it up nicely. A duet with Jane Horrocks on Things takes it to another level, it keeps the mood light something refreshing compared to just about everything else in this list. Of course I have to mention Christmas #1 hit Somethin’ Stupid which saw Nicole Kidman end her year of singing on screen in Moulin Rogue with a hit single. Swing When You’re Winning is pretty simple in the end, it’s Robbie Williams singing Jazz standards like Mack The Knife and for the most part it’s great. He’s so likeable throughout, so much so that Robbie has nearly become as synonymous with Swing as he is with Take That. It’s not the best Robbie album, but as a transition into a new genre it does the trick.

Will I listen again?: Probably, but given Robbie’s extensive discography at this point, I’m much more likely to listen to his main studio albums.

Best Track: The only original track here, I Will Talk and Hollywood Will Listen is a surprisingly grandiose song that sees Guy Chambers and Robbie delivering yet another great song.