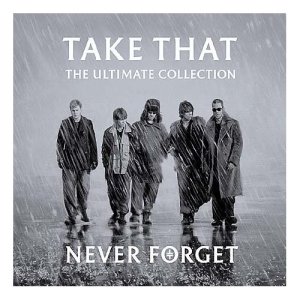 First listen?: What a stupid question.

I love Take That. Anyone that knows me will understand. I honestly don’t think I would have made it 24 years into my life and be sat here writing about music (As evidenced by the entire blog series based on them). My first true obsession, it was their first Greatest Hits album that I grew up with released alongside their split in 1996. I don’t think I fully appreciated that there would be no more music after that, I was too young to understand the concept of a band ‘breaking up’ so I was living for Everything Changes years after everyone else. Cut to 2005 and Take That are back and on the verge of being bigger than ever. It’s telling that Never Forget: The Ultimate Collection is the compilation that the public responded to the most, a consistent seller 11 years on, the nostalgia for these songs was the fuel that the most successful reunion in pop history needed. Pray, Never Forget, A Million Love Songs, Everything Changes and Back For Good are all some of the best ‘boyband’ records ever released and this collection cemented their place in pop history. That’s why a greatest hits collection from a boyband can make it into the all time best sellers list, the writing from Gary Barlow that makes this a consistently great collection of hits. Ignoring the only dud in the pack, the appaling 80s throwback I Found Heaven, you have a compilation that improves on the 1996 original thanks to an updated tracklist. I can’t remember a time when these songs weren’t in my life, I will always be going to see Take That on tour; I will always be forcing people to singalong with me in the car; this album sums up such a huge portion of my life; I will never forget Jason, Howard, Mark, Gary and Robbie.

Will I listen again?: Given that Take That have now had more albums post-renunion than before I think it’s unlikely I’ll listen to anything other than my own definitive Take That playlist. But of course every track on here will be played more than once in the next month.

Best Track: Such a difficult decision, songs like Pray, A Million Love Songs and especially Never Forget have given me some of the best times of my life hearing them live. When it comes down to it though, it can only be one song, the breakout moment for Robbie Williams and the song I was caught ‘breakdancing’ to at my 5th birthday party. It has to be Everything Changes. The Saxophone breakdown, the ad libs, the ‘Forever moreeeeeee’ bit; it’s incredible.