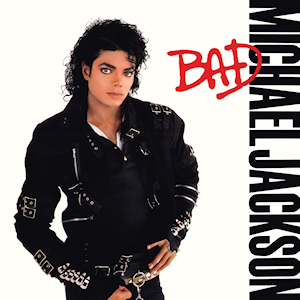 Let’s get one thing straight first, I’m not the biggest fan of Michael Jackson. I feel like his talent and status as the ‘King Of Pop’ is seen as impossible to question, like anyone who doesn’t think he’s the all time greatest is somehow instantly not worth listening to. Maybe it was growing up in a house that didn’t play his music, he wasn’t exactly shown as a role model for us as kids, quite the opposite given the decade I grew up in. The main thing for me is that the reasons people often give for him being ‘The Best’ I completely disagree with. I dislike quite a lot of the big hits and the biggest shock of all, I don’t think he’s that great of a dancer. He does that one spin move quite well, but much like his trademark ‘he he’ I just don’t see him as this incredible talent. A long intro is needed here as Bad is the very first Michael Jackson album I’ve ever listened to in full. Of course I’ve heard most of these tracks before, but this was my inaugural listen. I came away impressed, even if not surprised with how much I enjoyed it. At his best MJ manages to be soulful, aggressive and joyous all at once. Nothing manages this as effortlessly The Way You Make Me Feel, which recaptures the youthful tone of his Jackson 5 days. It’s catchy, feel good and out and out happy. It’s here that I’ve always felt Michael Jackson is most comfortable. Bad manages to blend the lines between this and the more aggressive tone of songs like Dirty Diana and Bad, showcasing the dance and vocal sides of the performer respectively. It’s the vocals that surprised me the most, listening to every track properly really makes you appreciate how talented Michael Jackson was as a singer, especially when he avoids the overuse of the ‘he he’s. Liberian Girl is a smooth take on this, while Man In The Mirror has become one of MJ’s signature hits in the years following his death. As a whole, Bad is incredibly good. It’s the painstaking effort you can hear in every second of the album that tips it over the edge into a truly great record. It took 5 years to produce this follow up to Thriller, and you can hear the focus it must have taken on every track. The use of layering of vocals and instruments is seriously impressive, I can’t remember the last time I heard a pop album this well mixed. I’m still not a huge fan of Michael Jackson, I never will be, but I’m glad I’ve finally listened to what is undoubtedly one of the best pop albums of the 80s.

Will I listen again?: Maybe. I’m surprised that I’m even considering it.

Best Track: I probably have to go with The Way You Make Me Feel. It’s just such a happy and joyful song.