‘How To’ is my guide to improving disappointing albums with some simple tweaks to the tracklist. You can listen to the new version of the album at the bottom of the page or see my full description here.

The inspiration for starting this series in the first place is Justin Timberlake’s new album The 20/20 Experience. Aside from having some of the worst album artwork in the last decade The 20/20 Experience is an 80 minute epic that’s tiring for nearly half of that. The pressure for JT to deliver following his ‘break’ from music for the last 6 years was obviouusly too high, and obviously there was no way 20/20 would better the incredible FutureSex/LoveSounds, but I’ve seen very little love for the album as we head towards release week.

The biggest issue with The 20/20 Experience is the length. With only 12 tracks including those on the deluxe, you’d think this is your typical 40 minute deal. You’d be wrong, of the main 10 songs only 2 of them are less than 6 minutes long. Most of the tracks here last far too long, especially the weaker tracks that make you suffer through 8 minutes, yes 8 minutes, of average RnB falsetto. 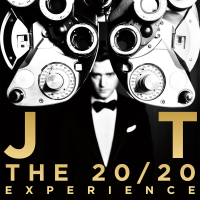 The Good News
There’s a great 50-60 minute album hiding inside this overwrought album, one that capitalises on what made the Timbaland/Timberlake dream team such a hit in the first place. With Timbaland producing every song here it also makes for a cohesive listen once you snip away some of the excess, even if there’s still nothing on here as good as My Love or What Goes Around… from FS/LS. I’ll take each track seperately and see if we can edit The 20/20 Experience into something worth listening to.

This is the song that has been stuck in my head for the last week. That chorus is so damn catchy and the middle 8 captures the soulful sound I was expecting from the album perfectly. The main portion of the song is great, ending just about when you want it to, the sweeping strings blending straight into the Timbo Remix (Which just about every song contains). This section half lasts way longer than it needs to, there was no need to include two extra verses here and it would be much more effective as a ‘break’ if it was about a 60 seconds long. Chopping the last 2 minutes off would make this a brilliant opening for the album.

I was totally disappointed by Suit & Tie on my first listen. 40 plays on though, I think I finally get it. Obviously cutting the lead single from the album would be an awful thing to have to do, so thankfully it remains as one of the strongest and most consistent tracks on the album.

One of my personal favourite songs from the album, a grinding tribal anthem that has Justin harmonising with himself alongside his iconic ooh’s and the best beats Timbaland has produced in years. The bridge is magnificent too, the hand claps recall those songs from the turn of the millennium like I’m A Slave 4 U. Songs like Don’t Hold The Wall are the reason I bothered to try and salvage the amazing parts of The 20/20 Experience as they far outweigh the poor moments. It could probably do with being about a minute shorter, the breakdown section seems to end just after you want it to, but it’s definitely one of the reasons to give the album a listen.

I cut Strawberry Bubblegum from my 20/20 Experience playlist after just 2 listens. It’s totally out of place on this album of throwback brassy numbers and dirty club beats, the chirpy lyrics about being so sweet like bubblegum becoming annoying roughly 20 seconds into the verse. At 8 minutes long too, this is the first song I would cut completely, possibly one of the worst songs Justin has appeared on.

Tunnel Vision is the perfect Timberlake song. Consistently brilliant with each new layer of production it features everything that I loved about the songs from FutureSex/LoveSounds. The hip-hop leaning repeated sample should become boring, but it swoops in and out without you noticing against the sudden bursts of throbbing bass and strings as contrast. It’s a well known fact that the best JT songs contain lots of beatboxing, and it’s great to add Tunnel Vision to that list.

Part of me wanted to like Spaceship Coupe. Perhaps it’s the fact it’s basically Justin recreating Ciara’s best song (the magnificent Promise) albeit with lesser success. I love the guitar solo halfway through, though in the context of the whole album it makes little sense. The space references grate, whilst the song becomes a plodding dirge minutes in, by the time the awkward sex noises begin permeating the production you will have switched off. I think if the song was about 4 minutes shorter and JT had enlisted his Love Sex Magic cohort for a guest verse I would have included it in my final playlist, but as it is I simply can’t.

One of the tracks that Timberlake in his recent preview shows, this is another soulful throwback style affair, albeit one that launches itself into a beatbox sound much more quickly than Suit & Tie or Pusher Love Girl. It’s a nice song, even if it doesn’t really go anywhere, but at least it lasts less than 5 minutes, the shortest track on the standard edition.

8) Let The Groove Get In
Let The Groove Get In has the potential to be the highlight of The 20/20 Experience, the frenetic mix of classy brass and trademark Timbaland beats makes for some incredible moments. The bridge is most definitely my favourite moment of the album, taking things way back to N Sync era harmonies, it feels familiar in a way that the rest of the record doesn’t. Sadly the song takes ideas just a little too far, you’ll want the rest of the song to be as memorable as the bridge. Cutting the section between the 3 minute and 5 minute mark. would make Let The Groove Get In JT’s best song in years.
9) Mirrors
There’s little I can say about Mirrors that I haven’t already talked about in depth on Twitter, but it’s safe to say the 20/20 Experience couldn’t exist without Mirrors. It’s my favourite single of the year, the only to last 3 weeks at the top spot too, making it the modern JT classic he deserved to release. You could probably trim a few seconds off here and there, but unlike every other 8 minute track here, Mirrors doesn’t feel that long it sitting beside songs like What Goes Around…/…Comes Around and Lovestoned/I Think She Knows perfectly in my hits playlist.

Possibly the most mediocre track on the album, Blue Ocean Floor isn’t quite as bad as Strawberry Bubblegum or Spaceship Coupe to warrant being cut completely. It doesn’t really go anywhere past the initial pulsing production and ethereal vocals. As a closer for the album it does the trick though closing things with a tease for more rather than a bang. It ends up being the only ‘ballad’ to make the final cut, none of those on The 20/20 Experience coming close to tracks like Until The End Of Time or Losing My Way from FutureSex/LoveSounds

The first of two extra tracks on the Deluxe Edition, Dress On is a mid tempo track that recalls What Goes Around…/…Comes Around, the strings blending with Justin’s surprisingly sultry vocals extremely well. It makes for a great transition track between Tunnel Vision and That Girl, the centre of the album dipping into Mid Tempo right before things pick up again. It’s a great album track, especially as it manages to contain itself within 5 minutes.

It’s crazy to think that Body Count didn’t make it onto the Standard Edition of the album, it’s a brash crazy jam of a song and would have been a great candidate for the third single. Timbaland doesn’t leave much to the imagination here, throwing just about everything he can into the production, the whole thing sounds like a sequel to his own track featuring JT Carry Out. It works extremely well when placed next to Let The Groove Get In, both songs taking the pace to a new high right before the album peaks with Mirrors.

Of course most people are terrified by the idea of cutting sections out from songs and mixing them so the timing still holds up, and I must admit I can’t be bothered to edit individual tracks. Instead I’ve made a new tracklist that I think emphasises the strengths of the record, whilst removing the 2 least interesting tracks in the process. The final result is in this Spotify Playlist: