3 Years ago this week, I made a post (here) about how I was obsessed with watching my play counts on iTunes. My top 25 Most Played at the time look like this: 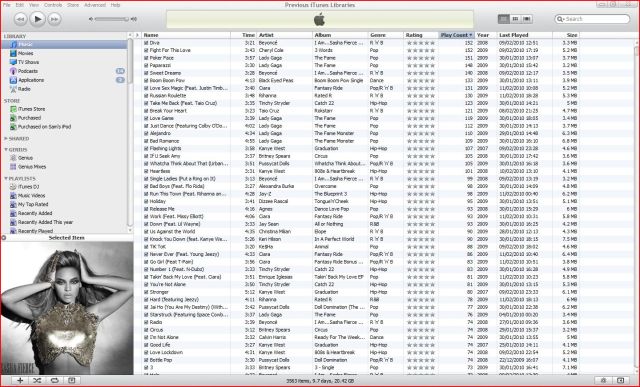 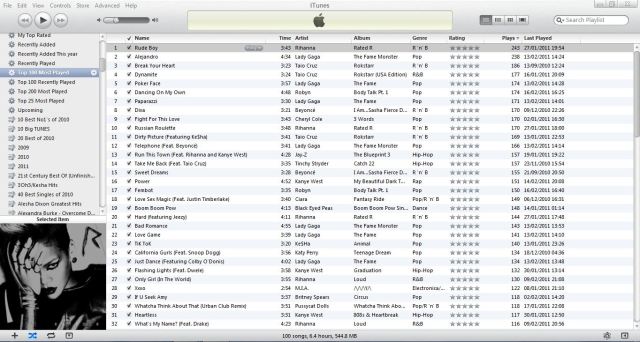 There was no post in 2012, but luckily I took a screenshot of what my play counts looked like at some point in 2012 (I can’t quite remember when I took this)

Now in the second month of 2013, it is time to have a look at what is happening over on my current Top 25 Most Played:

Things have changed a considerable amount in the last 3 years, though the high play counts of certain songs have meant the list has become quite samey in recent years. The last entries into the top 25 all come from 2011, nothing from 2012 or 13 has made an impact quite yet, in fact the only song from a 2012 album to make it into my top 100 is Comeback Kid by Sleigh Bells with 97 plays. I think last year marked a turning point for my listening habits, the days of me rinsing a song for all it’s worth may be ending.

That said, there is one song that made a massive jump onto the list in 2012/2013. Run The World is most definitely not my favourite Beyonce track, in fact it’s probably not even in my top 20, but for some reason that song became part of my daily routine for much of 2011 and 2012. The top end of the chart hasn’t changed much in the last year, and given how much I’ll be listening to her before seeing her in July, it’s looking likely that Rihanna will stay on top for the foreseeable future. Alejandro is the interesting change, the fact I only found out I was seeing her in 2012 the day before goes a long way to understanding why iTunes says I’ve only listened to the song 4 times in a year.

It’s becoming obvious that the Top 25 Most Played is becoming a redundant view of my current listening habits, I’m listening to lots of different music these days, rather than any specific artists or tracks. Using Last.fm is a good way of seeing where my current music taste is, my listening habits of the last 12 months though innacurate, still paint a decent picture of what has been playing on my iPod. 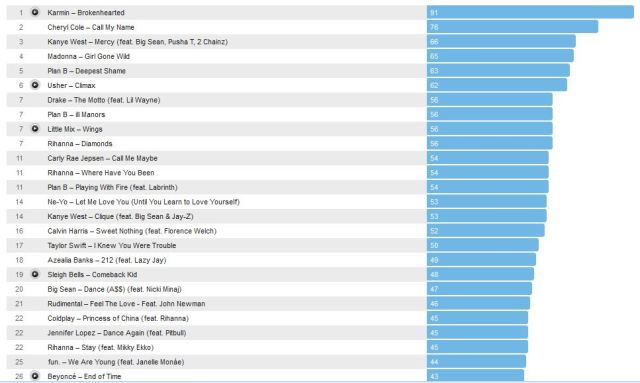 Brokenhearted is sure to become the next top 100 ranked song, but given my playlists have adjusted for the new year, it could take some of the other tracks on that list a bit longer.

Most people don’t really care, but 3 years on from when I initially asked the question it is obvious that while play count watching may be a step too far, I took that step a very long time ago.