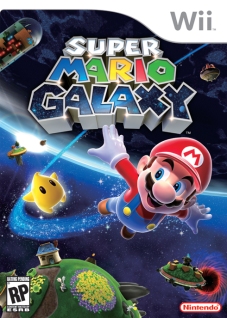 A distinct change for number 6 on our list, Mario had to be here sooner or later. The plumber has been the best in his genre ever since his debut in Donkey Kong and while there have been a few hiccups along the way, his back catalogue is impeccable. Super Mario World on the SNES marked the high point in the series for a long time, not even Super Mario 64 could beat it despite healthy competition. It wasn’t until 2007 that the series hit it’s peak though, in a game worth buying a Nintendo Wii for.

Super Mario Galaxy is why I play games. Following two heavy entries on the list, where my emotional connection to the series and characters is a driving force behind my love for the game, here it’s much simpler. You jump around the world, stomping on enemies, collecting coins and having a damn fun time doing it. Fun is a word I often use in reviews to say in defence to the various problems a game might have. It’s dumb fun blasting zombies in Dead Rising for instance, despite the multitude of problems that game has. Here that definition feels like an insult to what is ultimately the best game ever seen on a Nintendo console.

When the Wii was first announced, and even on release many complained that the ‘waggle control’ was pointless. Casual games took over early on, as Wii Sports was the selling point for the system. Super Mario Galaxy isn’t just the game that the Wii was waiting for, it’s the game the generation was waiting for, a defining example of how you only achieve greatness if you push a console to its limits. By using the Wii Remote in just about every way possible, but in places where it feels appropriate rather than gimmicky Galaxy makes a case for motion control like no other game has ever managed since. A simple shake of remote to do a spin attack for instance is subtle but feels totally natural.

The best thing I can say about the controls of Super Mario Galaxy is that despite this being a platformer that takes place on spherical ‘planets’ you always feel fully in control of Mario. You may be upside down, back to front and running into the camera but somehow the controls never feel awkward. You always fee safe in Galaxy, like you can’t make a mistake. Not to say that the game is easy, some of these levels are the toughest in series history, but when you do mess up it’s entirely your fault something more rare in games than it should be.

It’s both the easiest game to place on this list, and one of the most difficult to explain exactly why it belongs here. All I can say is that I collected all 120 stars, and right after I did I went back and collected all 120 again as Luigi. Super Mario Galaxy is like being a kid all over again, a joy that few games truly master.

Where can I play it? – Super Mario Galaxy is still available to buy in most places that sell Wii games. The 2010 sequel isn’t as consistent, but is still well worth you’re time.