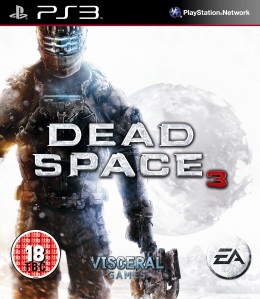 There are hundreds of articles online that detail just why Dead Space 3 is such a disappointment. Part of me wishes I could produce a set of interesting counter arguments to most of the biggest criticisms, in a bid to keep Pile of Shame the positive series it’s supposed to be, but it’s extremely difficult. Dead Space 3 is a disappointing game, but going into it with low expectations made it one I still enjoyed. I think…

I LOVED Dead Space and its sequel. The first game was such a shock to the industry back in 2008, a survival horror game that managed to feel relevent to the PS3/360 generation, but also had a sense of dread onboard an abandoned spaceship full of necromorphs that made every encounter thrilling. It was genuinely scary, with a tense atmosphere permeating every corridor. The sequel doubled down on more and more ridiculous creatures to content with and while it never quite matched the perfectly pitched sense of isolation in the first game it was one hell of a journey. Dead Space 3 is a co-op shooter where ammo management and survival instinct gives way for gun fights against human enemies and endless jump scares.

Dead Space 3 isn’t a terrible game, it’s just that it manages to strip away everything that made the series unique while throwing in some horrific design decisions along the way. One that has the biggest lasting effect is the checkpoint system. Both of the previous games did a stellar job of having specific save points you had to log in to so you knew exactly where you had left off. Here there’s a ‘Now Saving’ icon that appears at random moments, but will only truly save your progress at certain moments. There’s very little discernible difference between the Inventory Save icon and the Progress Saving one so doubting whether you about to lose literally an hour of progress is something no game in the modern era should make a player experience. It seems like a silly criticism to pick out, but it breaks much of the flow of the game, I found myself ‘playing until I knew it was safe to stop’ because I didn’t want to have to suffer through some of the more repetitive sections of Dead Space 3. 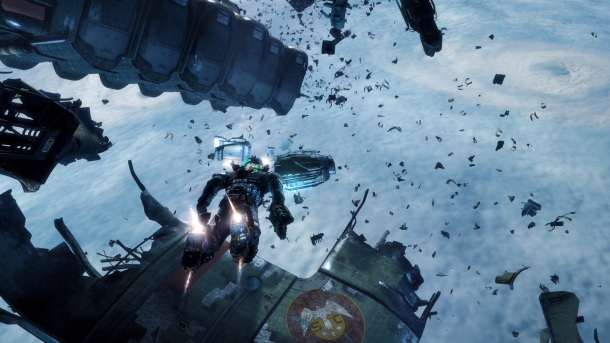 The other sticking point for me? Part of what made the original game so unique was the way that outside of a few choice guns, weapons were supposed to be the sorts of tools that an engineer on board a mining spaceship might need to use. The Plasma Cutter does exactly what you’d expect it to, dismembering machinery and necromorphs as easily as each other, it’s such a powerful tool that was is still the standout weapon for the series. The trick here though is making sure the player has to experiment with other weapons through a slow drip of ammo. Dead Space 3 removes all of this, instead featuring a weapon crafting system that removes all need for experimentation on the fly. Instead it makes more sense to stick with one weapon for the whole game, upgrading the circuits on this weapon alone. Ammo is the same across all weapons so other than near the very end of the game, I can’t say I ever ran out. You never feel like you’re the underdog, Dead Space 3 makes Isaac Clarke a near invincible hero.

As it stands though, Dead Space 3 is still an exciting game and one that still manages to stay ahead of the plethora of copycats that appeared in the years between it and the first game. Even if this is the entry that introduced human combatants to fight, as well as a needless co-op narrative that breaks the isolation this story preys on, it’s still enjoyable.

I wanted to finally complete Dead Space 3 due to my huge affinity for the first two games, both some of the my all time favourite PS3 titles. I don’t regret making my way through this action packed shooter, I just doubt I’ll ever be returning.

Best Moment: The Zero G spaceship bit in Chapter 7 was fun I guess.

Worst Moment: Any section that forces you to fight human enemies using your Plasma Cutter is awful.

As always, I’m taking a vote for the next game to add to my Pile of Shame series. so please let me know which game I need to play.

I'm so behind with #PileofShame but as a replacement for Dead Space 3 what game do I need to complete?