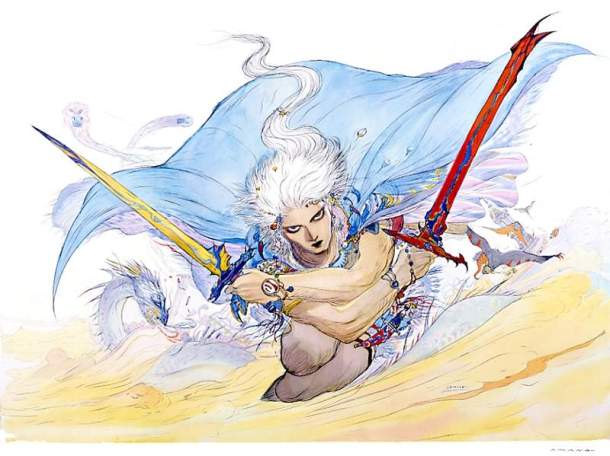 What is it with the second game in popular video game series? Super Mario, The Legend of Zelda, Metroid all had strange follow ups that managed to ditch much of what made the original games such an interesting new concept. Final Fantasy is no different and fans are rarely quiet when it comes to the dark sheep of the franchise, FFII. As someone who likes to think they have time to appreciate the lesser loved entries in their favourite franchises (Metal Gear Solid 2 is my favourite MGS title) I went back to Final Fantasy II with the best intentions. What I discovered was worse than I could have ever expected.

For the last month I have totally regretted starting this series as I’ve spent most of it thinking I will never make it through Final Fantasy II. A game of back and forth, of needless level grinding and tedious battles the issues inherent in the second game in my all time favourite gaming series are never in short supply.

The most obvious of which is the leveling system. An interesting concept, but poorly executed, your characters’ attributes grow stronger the more they are used. Often attack with a spear? Your strength and spear attribute will increase. Use Cure magic a lot, this magic will grow in power and MP cost. On paper this makes sense, but in practice it means having to sustain high damage in every battle to improve HP stats, as well as using magic spells over and over with no effect to improve their usefulness. The idea of defence goes out of the window for the first half of the game, while spells are often useless for a few hours. This is especially true of spells used to cause or heal status effects, which will miss over and over until about level 5 when they become essential. It’s not an enjoyable system to get your head around, it took me about 12 hours into an 18 hour game to finally mold my characters into viable warriors. On its own the levelling system would be bad enough, but in FFII you don’t even have a permanent party to train.

My character setup for the final battle. Notice how Leon is lagging so far behind the other 3 characters here.

The structure of Final Fantasy II was by far my least favourite aspect of the experience. The story itself is probably the best of the NES trilogy. Characters have genuine development, there are twists, where characters sacrifice themselves for the greater good and as a progression from the void that is the original Final Fantasy‘s narrative it’s a welcome change. The issue comes in the fact that every dungeon you go to, or ‘mission’ you are sent on gives you a new party member to deal with. Early on this rotating 4th party member is a welcome thing, as White Mage Minwu is much stronger than any of my characters ever became, but after this it becomes a rotation of weak characters one after another. If your team has upwards of 1500 HP each with a bunch of level 6 spells on each, the last thing I need is for one of them to be replaced by a 500 HP character that I’ll have to spend a few hours with power levelling before tackling the next dungeon. It manages to break the flow over and over again, with even the final dungeon forcing you to use a brand new weak party member.

The structure issues don’t stop there either, the early game in FFII suffers greatly from one of its key new features, the ‘Key Terms’ you ask NPCs about. By learning a Key Term from an NPC, you can then go to see another character and ask them for some additional information on the topic. It becomes a game of back and forth between towns that grows very old very quickly. I became sick of returning to Altair over and over again and later in the game the castle of Fynn. It becomes especially tedious if you think you have all the of the required information and travel 20 minutes across the world map to another town before realising you missed an NPC back in the first area. Out of my near 19 hour playthrough of Final Fantasy II I’d say that at least 6 hours of it was backtracking.

Final Fantasy II is a game that I’m glad to have completed. Glad to have completed for finality’s sake and because I never want to go near it again. It’s a game that pales in comparison to every other main series FF game, even its predecessor, despite II having more exciting boss encounters, a more varied play style and a much more interesting narrative. The overall experience was tough to cope with and I’m lucky I even managed to power through to the closing scenes. I’m glad it’s finally over, as FFII is a game I’d like to forget about nice and quickly.

The end is in sight, especially now that I have dealt with the first two games in the series. I’m hoping that I can quickly finish the last section of Final Fantasy IV before December as I’m more than certain that I’ll need at least a month to tackle Final Fantasy VI from start to end. My deadline was New Years Day and with the end goal so close I’m going to try my best to make it. Expect my thoughts on FFIV very very soon, where I attempt to wash the memory of the worst Final Fantasy game away for good.

One thing I will say about Final Fantasy II is that some of the music really is worth a listen. I really liked Tower of the Magi which plays as you ascend Mysidian Tower. It reminds me of the music from the castle in FFVIII, it has this kind of twangy organ feel to it which I really liked.

I’ve gone for the first boss fight with the big baddie of Final Fantasy II as I love how much his sprite contrasts with everything else before him. On the PSP his sprite is huge compared to your party, which I quite enjoyed. (You can tell I was desperate to find something I actually enjoyed here)

One thought on “The Final Fantasy: A Final Travesty (FFII)”