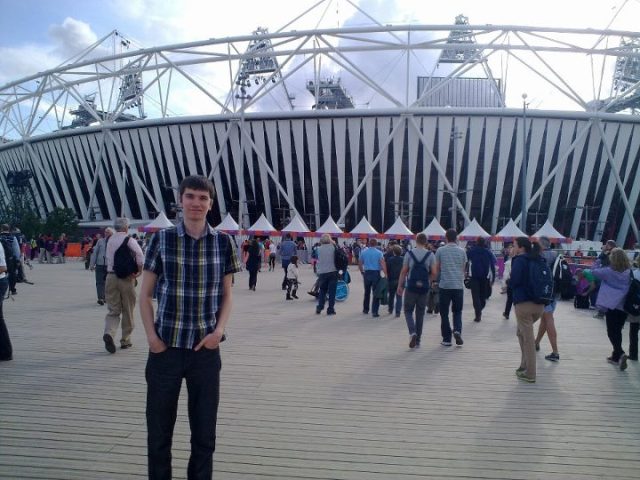 Golden moment of the day – I was there!

I wanted to finish all the other articles in my catch-up before writing about Day 8, the most important day of the Olympics for me. We applied for tickets to 3 Olympic events, one night of swimming and Day 8 and 9 of the Athletics. Disappointed people all over the country had missed out on tickets, and I thought we had as well. A week later I get an email from London 2012 saying they look forward to seeing us at the games, turns out the money had come out of my Dad’s account and he just hadn’t realised. We’d gotten tickets for the final event of the Heptathlon and the Men’s 10,000m featuring two of the faces of the games, Jessica Ennis and Mo Farah. I was excited, we had the chance to see the GB team win a gold medal, as well as visiting the Olympic Stadium itself. Did I realise that we would be there for one of the greatest nights in British Athletics history? Of course not, but I wouldn’t forget that fact when August 4th finally arrived.

It didn’t quite hit me until we were walking up the staircase into the Olympic Stadium just how big this moment was. It’s very doubtful that I’ll ever be able to go to another Olympics in my lifetime, and actually being at the event everyone in the world is watching was slightly overwhelming. We couldn’t have picked a better night to go either. Though the man of the hour, Bolt wasn’t set to appear until the night after, we ended up having the best Olympic experience any British supporter could possibly have. 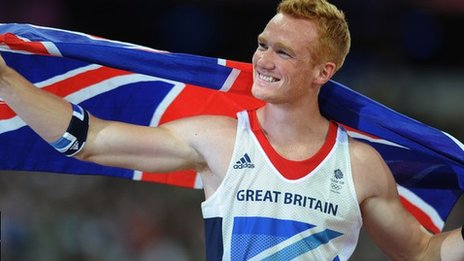 We had a full night of British hopefuls, all 5 of our main Athletics medal chances competing. We saw Dai Greene and Christine Ohuruogu in their semi finals as well as the aforementioned finals with the Men’s Long Jump placed directly below us.

We were in a prime position to get behind the British men in this final, with Greg Rutherford jumping incredibly well from the start. They began their run directly beneath us, so would get us to clap them in on each jump. It was a shame in fact that because of the this being one of the ‘smaller’ events of the nights it was overlooked so many times. While races began and ended, music blasted out, and the crowd went wild over and over again, I couldn’t imagine being able to find focus for a jump. Rutherford did though and in fact the moment he made his biggest jump of the competition seemed to be missing from all of the coverage I saw once we got back home. There was another race on at the time, and I remember my Dad pointing in the opposite direction to everyone else and shouting ‘8.31!! 8.31!!’ after he made the jump, the crowd not realising until the hysteria with the current race died down. He did get his moment once the competition ended though and even from afar you could tell he was genuinely amazed to have won the Gold. I was too, and being there to see it was brilliant.

We’d already ‘guarenteed’ a gold medal in the Women’s Heptathlon too, with Jessie Ennis scoring a ridiculous points lead going into the 800m. She merely had to finish the race in a reasonable time to secure the gold, but that wouldn’t satisfy eighty thousand crazy British fans; the race that followed certainly did! It was two laps of madness, hard to hear anything above the shouts of ‘C’mon Jess!’ and ‘You can do it!’ Those last 100m were incredible and as she crossed the line the place exploded into mass whooping and punching the air. Everyone was proud of the woman who had become the face of the London games and seeing Jess cross that line first made the moment that bit sweeter. Looking for side to side everyone was smiling, celebrating with the people they had come with, sharing the moment with ‘strangers’; everyone was united in a universal admiration and respect for a single woman. It’s not like football matches, where you are behind the ‘team’, this was eighty thousand people expressing their adoration of a single athlete, the brilliant Jesicca Ennis. It was a moment I thought I’d never experience again, but half an hour later we were once again on our feet for another British Olympic Icon.

Unlike Jessie Ennis who was a shoe-in for the Gold given how far ahead she was or Greg Rutherford who had defied the odds to take a surprise win, the pressure on Mo Farah shoulders as that 10,000m final began was extraordinary. The whole stadium was high on the two Golds we had just won and I didn’t think the buzz could get any greater? I was wrong of course and each time the athletes ran round our corner we would all stand and cheer Mo on. He has the perfect name to shout out, most people alternating between the ‘Mo! Mo! Mo!’ chant and a longer ‘MOOOO!’ as the race went on. I have to say that watching the 100m is much better on the TV than from where we were sat, the first bend after the start line, but for the 10,000m being there was everything. It was like a Mexican wave of noise and applause for 30 minutes, building and building until the final 3 laps where people were literally jumping up and down cheering our man on. The last lap was unlike anything I have, or ever will see again. It was emotional, you could feel the noise from the other side of the stadium whilst hearing those next to you.

It was inspiring to see such amazing talent on display from these three British Athletes, I wish I could be so dedicated and disciplined in my own life in order to achieve greatness like this, Rutherford, Farah and Ennis setting the standard for the Olympians still to come. I’ve been to some sports events before, obviously concerts have the same crowd vibe but that’s not really the same, but nothing prepared me for the Olympics. The best night of the whole games for team GB it really felt like we were a part of history, even if all we did was cheer our athletes on. It was an experience that I will never forget, and though I’m sure plenty of people will be pretending that they had a ticket for years to come, I can honestly say ‘I was there’.

Couldn’t pick just one so all 3 are my Athlete of the day!