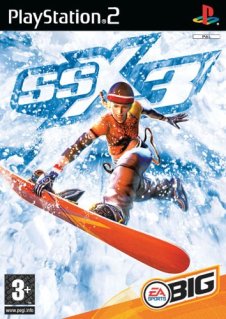 Going into the final stretch of these articles there was one game I was really worried about writing about for numerous reasons. My adoration for SSX, and especially the third game in the series is well documented in various piece of writing on the net, but I’ve never sat down and just written exactly why I love SSX3 so much. I was scared that I could be at a loss for words, or worse still reach the end of my points 3000 words later. Either way this turns out, one fact remains, I absolutely adore SSX3.

Unlike most sequels in this list, where my love for the series has been carried from the original game, SSX3 was my first experience with the franchise. I rented it on a whim in one of my half term breaks back when it was released, a decision I’ve never regretted since. As the game was still expensive to buy at that time, I had to settle with getting the previous two games, SSX and SSX Tricky the second of which is often regarded as the fan favourite. While I appreciated learning how the series developed over the years, it just wasn’t the same. I wanted to get back on the three peak mountain of SSX3, and once I did I knew I was home.

Hitting the slopes as Elise down routes like Much 2 Much and Schizophrenia brings out the best and the worst in me. It’s one of the few games that I feel I’m genuinely ‘good at’ (save for Dance Dance Revolution, but that’s a different story) and so I have this strong sense of competitiveness with myself. Usually an hour of play can result in me hitting retry on RnB, my most frequent slope on the game, over and over again hitting pause when I make even the smallest of mistakes. It’s the most obsessive I get over gaming, and totally unlike me when you compare it to my push forward without thinking style of play in most adventure games, but somehow SSX3 turns me into a frustrated perfectionist. It sounds like a negative when I say it like that, but it’s a feeling that no other game has brought out in me, not even the incredible but flawed PS3 game from earlier this year.

There’s something magical about being able to take a 30 minute trip from the top of the SSX3 mountain right down to the bottom; passing through the back country where terrain is treacherous or getting distracted by halfpipes as the clock ticks along through to the firework finale at Metro City. It’s that the game never forces you to take it too seriously, in fact compared to nearly every other game in my top 10, this is the purest ‘Game’ of them all. Hit the slopes, pull off ridiculous tricks, and wear a ridiculous Afro while doing it.

This post has been stuck in my drafts on my site for the past 3 weeks, due in large to the exams I’m currently sitting, and so it probably doesn’t fully convey how important SSX3 is to me. That said, I thought it was best just to press on otherwise this list may never be finished. I think that this game marked a turning point for me in terms of being more open to experience every genre the industry has to offer. And like so many games on this list, I doubt I’d be in the position I’m in today without the time I spent playing this game. How can any game compare to this?


How Can I Play It? – If you only have access to the current generation of consoles, the recently released SSX certainly does the trick. That said, SSX3 is a much tighter and more well rounded experience, so it’s worth dusting off the PS2 to play it.